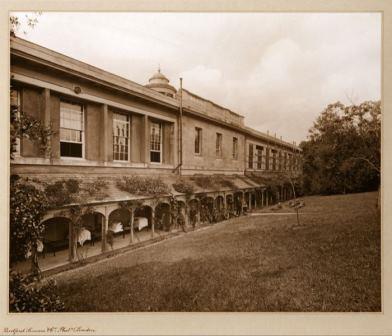 Woburn Abbey riding school in use as a hospital
[Z141/5, photograph by Bedford Lemere & Co Photographers]

Sunday 17th October 1915: Yesterday evening an ambulance train arrived at Bletchley Station carrying wounded soldiers for transport to the hospital at Woburn Abbey. It was met by the Duchess of Bedford, who took personal charge of her nurses and assistants, the Woburn Abbey Red Cross ambulance, and a fleet of twenty other motor cars. Sixty-five of the train’s occupants were sent to Woburn, with the remaining 120 being taken to Northampton. An interested crowd gathered, which was easily persuaded by Police Inspector Callaway and six special constables on duty with him to keep its distance from the motors, allowing the injured men to walk or be helped to the vehicles. Within twenty-five minutes all the cars and the ambulance had left for Woburn. Most of the men, who were casualties of the fighting around Loos and Hill 70, were established in their comfortable quarters at Woburn Abbey little more than twelve hours after receiving their wounds.