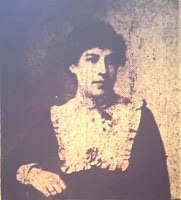 Tuesday 5th October 1915: An inquest opened this afternoon in Luton into the death of Mrs Amy Martin, age 32, of Queen Square. The coroner and jury heard that at 6.30 yesterday morning Mrs Martin’s husband, Henry Charles Martin approached Police Constable Hencher in Park Square and told him “I have got to come with you. I have done my wife in.” When told that this was a very serious statement to make he replied “It’s true. I stabbed her with a knife. I believe she is dead. She drove me to it.” Martin was taken to the police station and P.C. Hencher and Inspector Janes went to Church Square. There they found Mrs. Martin in a neighbour’s house. Her throat was cut and she was lying in a pool of blood. An attempt had been made to stop the bleeding by wrapping a towel around her neck. A doctor arrived and stitched the wound. She was taken to Bute Hospital, but at 9.20 a.m. she died.

The neighbour, Mrs. Fookes, stated that as her husband did not start work until 8 a.m. on Monday they were still in bed when he was woken by a scream, “Oh, Charlie!” Realising something was wrong next door he put on some clothes and ran to the back bedroom window where he saw Mrs. Martin ban on the door and fall to the ground. He and his wife rushed downstairs and found the Martins’ son Charlie trying to staunch the blood from his mother’s throat with a small pocket handkerchief. They took her in carefully, Mr. Fookes tried to stop the bleeding and his wife ran for the doctor. The boy Charlie said he was in bed when he heard his mother scream. As he ran towards the front bedroom in which his parents slept he saw his mother rush downstairs. He followed and found her lying on the ground at Mr. Fookes’ back door.

Gunner Henry Martin is stationed in Stratford with the Royal Garrison Artillery but had been home frequently, on some occasions without leave. Mrs. Martin’s Father, Edwin Plummer of 10, Blythe Place, said his daughter was a hard working girl who had lived in Luton all her life until Martin went to work at the London Scottish Foundry Ltd. in Barking, Essex about two years ago. She had worked for Messrs. Webb and Baker, the hat manufacturers, and Martin had worked at Messrs. Brown and Green’s Foundry and then the Diamond Foundry. He believed his daughter’s marriage was not a happy one. When they lived in Barking she had come home to her father for five weeks because of the abuse. Her husband drank heavily and had lost his situations at Brown and Green’s and in Barking, where his master told him he was a drunken beast. When asked if he had known Martin to strike his daughter he replied: “It has been worse than striking – the language and drink, and they have struck each other”.

The Martins have three children, aged twelve, eleven, and seven. Mr. Plummer’s loss was his third in two years; he was still in mourning having lost both his wife and son within that time. The inquest was adjourned until Friday afternoon.