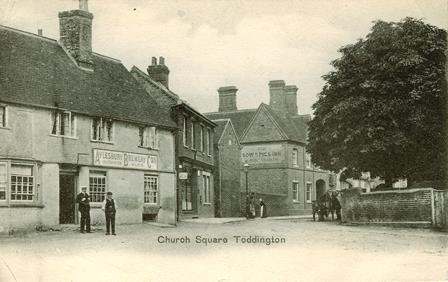 Thursday 14th October 1915: A parish meeting has been held at Toddington to discuss whether street lamps should continue to be lit in view of the threat posed by Zeppelins. Dr. Waugh, chairman of the Parish Council felt that while Toddington itself was not likely to be in danger of German bombs, as it was one of the highest points in the county the lights could serve as a guide to other places. As the rates had already been set and the Council was under contract to the Gas Company a decision not to light the lamps would not lead to a reduction in the amount payable. After some discussion it was decided that the lamps would still be lit, but the tops would be darkened and they would be extinguished at 9 instead of 10.

Toddington also now lays claim to its own company of Girl Guides, formed by Miss Ella Neale with Misses Alice Hobbs and Daisy Dunham as her lieutenants. On Saturday the 24 members of the company marched to Toddington Manor where they held a parade in front of the house. New members were enrolled, the Guides saluted the flag and gave a short display of drill. The company were then treated to tea in the manor dining room by Mr Weston Webb.