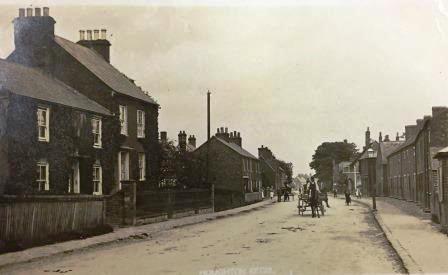 Tuesday 26th October 1915: The Voluntary Aid Detachments for Bedfordshire have all been asked to reply to a questionnaire concerning their activities. The response from Houghton Regis  V.A.D. 46 gives a good example of the scope of a detachment’s work:

The Hospital was opened on January 13th 1915 and has been working without interruption up to the present time. The daily average attendance of members is 7, who are on duty two at a time from 7.30 a.m. to 9.30 p.m. The number of patients passed through this Hospital is 195 – the average number of days that patients were retained in the Hospital was 10 days. The Hospital has received a Government Grant of 3/- per day per occupied bed since March 1st and also a Mobilization Grant of £10.0.0 from the British Red Cross Society.

One member has undertaken Special Service at Home, and has been nursing at The Nursing Home, 3 Mandeville Place, for three months. No members of this Detachment are serving abroad and at present none have volunteered for Special Service, as the Detachment is a small one, and has only been started a year and a half.

A Working Party was formed last winter, to which most of the members belonged, and several large parcels of garments for the sick and wounded were sent to the Depot at . The members have also done a great deal of needlework for our own hospital.

No Members of the Detachment are working abroad and none have attended at the . Night duty was undertaken by the Members from January until May, but as only slight cases of sickness are admitted, it was not found necessary to continue this, and an orderly is now on duty at night.

There were six beds in this Hospital when it was opened, but the number was increased to nine after few weeks, and arrangements are now being made to add five more beds in case they are required for wounded during the winter.