Zeppelins and the Bells of Barton-le-Clay 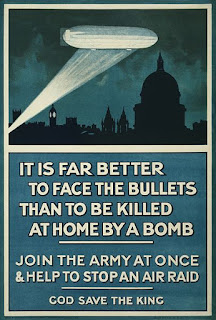 Wednesday 1st December 1915: Blinds are being used to darken the Church at Barton-le-Clay so that Services can still be held at the usual times. The building has also been insured against air raids. People who are inclined to make light of the need for these precautions should remember the catastrophe which took place at Hertford [1]; if the regulations had been observed this could have been avoided. To comply with the express wishes of many parishioners the bells have not been rung as usual on Tuesday evenings, as that is about the hour when Zeppelins are likely to appear. As Services are held in non-danger hours the bells are still rung - although twelve ringers have now been lost to the armed forces it has still been possible to sound all eight every Sunday. It is expected however that the midnight peals for Christmas and New Year will not be rung.


[1] Eight civilians were killed in a Zeppelin raid on Hertford during the evening of Wednesday 13th October 1915 [Source: Hertford Town Council http://www.hertford.gov.uk/war-memorial/ ]
Posted by Kathryn at 07:00