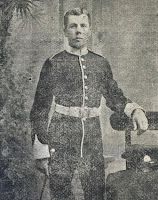 Wednesday 29th December 1915: The family of missing soldier Percy Gambriel are continuing to make enquiries in their efforts to trace him but this are still proving fruitless. They have contacted the British Red Cross, the Bureau Zuricois pour la Recherche des Disparus at Zurich, and now the Prisoners of War Help Committee in the hope that he may be a prisoner of war. Unfortunately from their reply it seems unlikely that this is the case: “The Committee beg to say that they regret they are not at present in possession of any information in regard to the person about whom you enquire, as being a prisoner of war, but should any news be received, it will immediately be communicated to you”.

For another family the news of their missing son is grim. Private Arthur Emmerton of the 2nd Bedfords, aged 23, was last heard from by his parents on 23rd October 1914. It was thought that during the hard fighting which took place at that time he was separated from his comrades and taken prisoner. However, nothing was heard of him and on November 11th 1914 he was officially reported missing. Mr and Mrs Emmerton of Bedford Road, Kempston, have continued to make enquiries to no news of their eldest son has been received. The War Office have no written to them stating that “the Army Council have been regretfully constrained to conclude that Private Arthur Emmerton, 2nd Bedfordshire Regiment, is dead”.