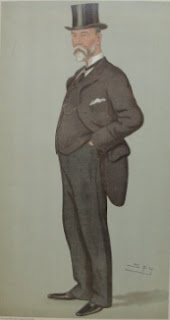 Thursday 30th December 1915: The funeral took place at 1pm today of Mr. Samuel Whitbread, D.L., J.P., who died at his residence at Southill Park early on Christmas morning at the age of 85. The church at Southill was filled to capacity for his funeral. Mr. Whitbread was associated with the brewery which bears the family name from 1867 and in 1889 became chairman of the company. He served as the Liberal Member of Parliament for Bedford for forty-three years from 1852 until his retirement in 1895. Locally he served as Chairman of the Governors of the Harpur Trust and of the Bedford County Hospital, to which he was a great benefactor. He took a great part in administrative affairs in the county and was at one time an Alderman of Bedfordshire County Council. Of great importance to the county was his role as Chairman of the Biggleswade Water Board in providing an excellent water supply for Biggleswade and the surrounding parishes by sinking a well in the greensand from which supplies are piped as far afield as Kempston.  He continued to be active in local affairs until a few years ago when advanced age and deafness forced him to retire.

Samuel Whitbread maintained his estates in excellent order, building a number of model cottages, restoring the churches of Elstow and Cardington, and carefully preserving the two villages. Large numbers of his tenants have attended a memorial service for Mr. Whitbread at Elstow where the flag flew at half mast. During his career he spent over £50,000 building and improving cottages on his estate. He helped to draft the Local Government Board Act which established Parish Councils and until his death was the first and only Chairman of Southill Parish Council. Thanks to his generosity Southill possesses a splendid cricket ground. It is said that, “He was one of the kindest and most sympathetic of men, always ready to help any good cause, and to relieve any necessitous case, his right hand not knowing what his left hand did; he never, I believe, said a harsh word to any person of humble estate, and was most careful not to hurt anyone’s feelings.”