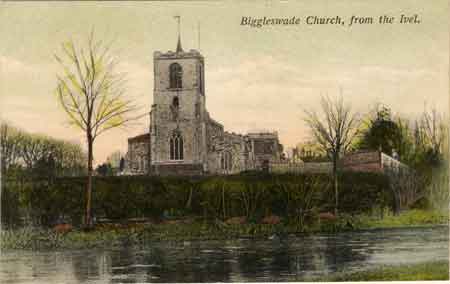 Sunday 5th December 1915: The 9th Bedfordshire (Biggleswade) Troop of Boy Scouts attended a special service at Biggleswade Parish Church this afternoon at which a collection was taken in aid of the Boy Scouts Motor Ambulance Fund. The Troop paraded at Headquarters before marching with the band via Hitchin Street, High Street, Sun Street, and Shortmead Street to the Church. Much amusement was caused when in Shortmead Street the marching scouts overtook a piebald cow. She halted in the centre of the road, considered the Scouts, then turned and set off at the head of the Troop, swishing her tail like a Drum-Major’s staff. She marched sedately at the front until she reached the Girls’ Church of England Schools where she chased some schoolchildren down a nearby lane.

The Troop’s Chaplain Reverend G. C. Rolfe preached on the subjects of “Progress and advance”. The boys were told “People … are looking for the Scouts to set the tone of what an English boy ought to be. God wants you to be true English Christian boys. That does not mean that you are be dismal and have no pleasure, but that you should be the happiest boys in the world”. After the service the boys were addressed by Lord St. John, the Chief Scout of Bedfordshire who told them it was always a pleasure to come to Biggleswade and that it was a pleasure to see the troop looking so smart. He urged the boys to obey the Scout laws in crossing the river of life. The Scouts then marched back to Headquarters where they were dismissed. It is hoped that some of the young lads who hang around the streets or lounge in the Picture Palaces everything would set aside two nights a week to join the “Scout boys”. There are several vacancies in the ranks for boys aged 11 to 18; any who wish to join should apply to the Scoutmaster.