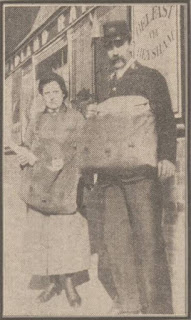 Tuesday 21st December 1915: To alleviate the labour shortage caused by the war the Post Office has taken on a number of postwomen. A reporter who spent time with a lady learning the ropes in New Bedford Road area of Luton tells us, “She walks along very briskly, and appeared quite a home with her bag and bundles of letters”. At Woburn Miss Ethel King has taken her brother’s place and in now delivering letters in the town. The mid-day delivery has been discontinued and the residents of Woburn are not only receiving two deliveries a day. A second postwoman, Miss May Skinner, is expected to begin deliveries imminently.