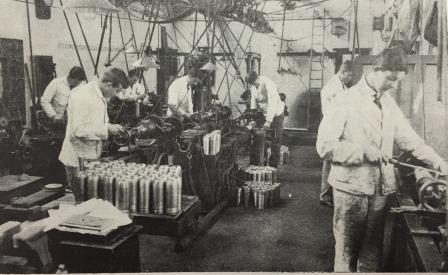 Monday 20th December 1915: The boys at Bedford School are contributing to the war effort by carrying out munitions work. Through the assistance of Mr. F. Yarrow at the end of the summer term the Headmaster was able to obtain from Yarrow’s about 50 high pressure valve bodies to be machined and 50 bolts and nuts for the casing of turbines for the Navy. During the summer holidays about 50 boys volunteered for this work, working in three shifts. Each shift of boys worked for 3½ hours every other day under the supervision of Mr. Davison; an extra shift of amateurs worked two afternoons each week. The task was completed early in the autumn term to the complete satisfaction of Messrs. Yarrow. Arrangements were also made with the South East Midlands Munitions Board to manufacture 13lb shells. Work has been carried out on these since the beginning of term by the boys and amateur works, to whose numbers some ladies have recently been added. A large number of boys have volunteered to work during the afternoons outside school time, and others to work during the Christmas holidays. Extra machinery has been required to manufacture the shells, with a large amount of preparation in the manufacture of gauges, chucks and special tools, only made possible by the skill and devostion of Mr. Davison. The gauges and chucks for some of the final operations are not yet complete so no shells have yet been finished. A large number are nearly complete, and nearly all have passed the tests so far applied to them by the Government Inspectors.