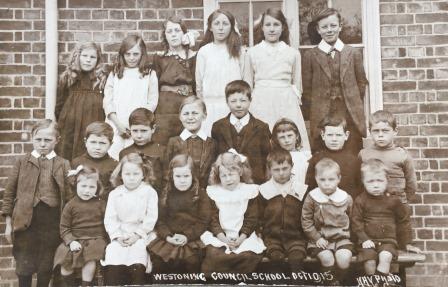 Saturday 4th December 1915: News from the Villages
Barton-le-Clay
A collection was made during the week ending November 13th for the National Million Shilling Fund for the Belgian Army. This raised a total of £5, very considerably more than the £2 the village had been asked to contribute. The scheme was to raise a million shillings to provide comforts of food and clothing to the entire Belgian Army as well as necessities such as field kitchens, sterilizers and trench heaters.

Gravenhurst
Miss Miller has now collected over 1,000 eggs for the sick and wounded. Many have been sent to base Hospitals in France. Percy Parrish, from whom we first heard in January, has written to his mother describing how his brother Cyril has been wounded: “I went down and saw his (Cyril’s) Captain and he told me all about it, he was hit about 3 o’clock in the morning while on guard in the trenches, and the Captain said he was the best bit of stuff he had seen, we can well be proud of him; and he gave over his orders as if nothing had happened, and told the boys he was just going for a holiday, and he would be back in a month or two, and have another go”.

Flitton and Greenfield
Mrs Arnold of Greenfield is grieving the sad loss of her husband Omar, who was killed when his ship was in collision with another in the Aegean Sea. “He was a good man and his heart was turned to God”.

Westoning
The Day School children are busy preparing to give a concert in the New Council Schools on December 10th. The aim is to provide comforts for Westoning men at the Front. The Sunday School children have agreed to the suggestion that they should forego their Christmas treat and the money saved be added to the amount raised.

Silsoe
The parish congratulates Colonel Lumley Jones on his appointment as Brigadier General. As he began the war with the rank of Captain, his promotion has been extraordinarily rapid.

Clophill
A concert given at Clophill by violinist Monsieur de Reyghere and his concert party has raised nearly £5 for the Belgian Relief Fund. Belgian badges were distributed during the interval and a collection made on behalf of Belgian soldiers which realised £1 7s 0d. M. de Reyghere has committed himself to giving a hundred concerts for this cause and has already performed more than sixty.

Mr and Mrs James Sharman have lost their baby James to whooping cough. There have been a number of bad cases during the epidemic which caused the closure of the school last month, but this was the only death.