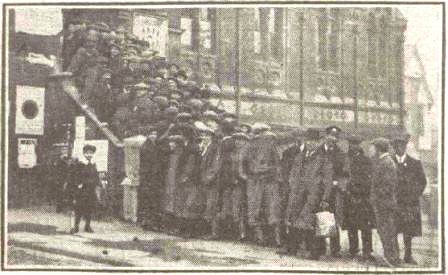 Saturday 11th December 1915: Today is the last day of a recruiting scheme introduced by the Director General of Recruiting, Edward Stanley, the 17th Earl of Derby, which has been in operation since the beginning of November. Using information from the National Register compiled earlier this year all eligible men aged 18 to 41 who are not in an essential occupation have been interviewed by canvassers and asked face-to-face whether they are prepared to join the Forces. Those who agree are obliged to go to the recruiting office within 48 hours. Once sworn in they are being placed in one of 46 groups. Each group will be summoned in order for active service, with each being given 14 days’ notice. All the groups of single men will be called up before those containing married men.

The Corn Exchange at Luton has been a hive of activity this week with men rushing to sign up before the scheme closes. So many men have presented themselves to enlist that many have faced a wait of several hours. The pressure today is so great with hundreds of men from the big engineering works wishing to attest that it is feared the staff may not be able to deal with all the men by tonight. The rumour circulating in the town that the scheme would be extended is now known to be false. It is hoped that enough men will have been induced to enlist by this recruiting scheme that it will be possible for the Government to avoid introducing conscription.