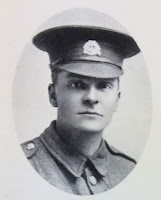 Wednesday 8th September 1915: Elderly widow Mrs. Ann Tuffnell of York Street, Luton, has suffered the loss of a third son, two of them casualties of the war. Her husband Staff-Sergeant William Tuffnell was an old soldier who had served for some considerable time abroad, mainly in Gibraltar. He died nearly thirty years ago leaving her to raise a family of one daughter and seven sons alone. Her sixth son George was killed at the age of just 18 in a tragic accident at work on Christmas Eve 1902, when he was crushed by a steam crane at Messrs. Hayward Tyler’s iron foundry.

At the outbreak of war Mrs. Tuffnell’s fourth son, Harry, was a reservist working at Commercial Cars Ltd. He had served three years with the 1st Bedfords, winning two medals for his actions during the Boer War, and nine years with the reserves. Called up when the war began, he was wounded in the early fighting. After a month in hospital at Cork and some time recuperating at home he returned to the Front just before Christmas 1914. He was reported missing after the battle of Hill 60 and although his mother has received no official notification of his death there can be little doubt that he has been killed.[1]

Now Mrs. Tuffnell has suffered the terrible blow of losing her youngest son. Private Benjamin Tuffnell was a blocker employed by Carruthers Ltd. when he enlisted in the 1/5th Battalion of the Bedfordshire Regiment last September. He went to Gallipoli as orderly to Captain Rawlings, who was also wounded. The first Mrs. Tuffnell heard of her son’s death was a letter from another Luton man, Private Soper of Boyle Street, news which has since been confirmed by the War Office and in a letter from an officer. Lieutenant Nicholas wrote “We went into action on Sunday last and he was with me until he was hit, and Mr. Rawlings, whose servant he was, was also with me. We did all we could for him, and I think that he died under no pain. He was wonderfully cool and brave under fire and behaved just like a true British soldier that he was. More I cannot say – I am too deeply grieved.”

Three other Tuffnell brothers are still serving in the forces. The eldest, Private Frederick Tuffnell, is a Home Guard at Luton; Private Owen Tuffnell, a Militia man, is in the Home Guard at Sharnbrook; and 30 year old Private Alfred Tuffnell is in the trenches in France with the 7th Bedfords.[2]

Source: Luton News, 10th September 1915
[1] Private Henry Tuffnell was killed on 21st April 1915. His body was subsequently recovered and he is buried at Oostaverne Wood Cemetery.

[2] This terrible year for the Tuffnell family also saw the death of Alfred on 4th November 1915.
Posted by Kathryn at 07:00