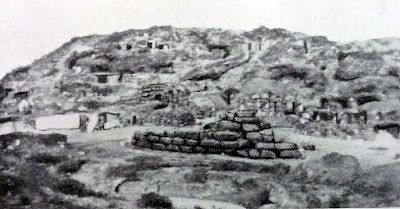 Wednesday 15th September 1915: Sergeant Maurice Taylor Wood of Biggleswade has written home to his parents from Gallipoli, where he is serving with the 1/5th Battalion of the Bedfordshire Regiment. He tells them:

“I am living an open air life entirely. It seemed strange at first lying down to sleep at night on the ground and gazing up into the starlit heavens. At the present time we are camped right on the sea shore. The sea is within 15 yards of my feet and reminds me very much of Lowestoft. We are allowed to bathe before 8.00 a.m. and after 5.00 p.m. Of course we are allowed to wash and also to wash our clothes at any time. It is still very warm out here, but we are becoming accustomed to it. The nights, however, are a little chilly.”

He is optimistic that the Gallipoli campaign will not last much longer and was grateful to have received some bread the previous day, “the first bit for over a fortnight”. They had also been served Maconochie’s Army Rations which “are splendid as they contain several different kinds of vegetables … I also hear a rumour that fresh meat is also on the board”. He had been speaking to “a few old Biggleswade boys” and was sorry to report that three had been wounded.

Two Shefford men have also been wounded and are now recovering on hospital ships. Private Charles E. Dukes of Shefford has written to his mother that he was hit by a piece of shrapnel in the leg, but expects to return to the firing-line in a week or two. He says that the Turks have the advantage of knowing the country very well and of many deadly snipers, but that when they see the British bayonets, “they run as though they were racing in the Olympic Games”. The other Shefford casualty, Private Hubert Harris, was struck on the back of the head with a piece of shrapnel. He was fired on repeatedly as he crawled from the firing-line. A bullet hit him near the heart, but struck a metal cigarette case which had been given to him as a gift by the lady of the house where he was last billeted. The bullet then struck some books and papers in his pocket and was again deflected, leaving him with only a slight graze.