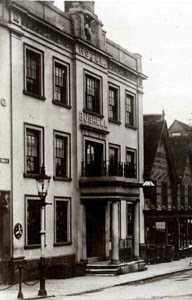 Friday 17th September 1915: An inquest at Houghton Regis heard today of the death of Acting Sergeant Thomas J. W. Hubbard of the Royal Engineers following an accident at Leedon on Wednesday night. Sergeant Hubbard had attended a party at the Swan Hotel, Leighton Buzzard at which the Signals Section had been the guests of their commanding officer Captain Howe and his wife. As he returned to Houghton Regis a tyre came off his motorcycle and he was thrown onto his head, receiving fatal injuries. Dr. Kenneth John Aveling of the Royal Army Medical Corps said he was called to the V.A.D. Hospital at about 10.30pm on Wednesday and found Sergeant Hubbard in bed suffering from pressure on the brain resulting from a haemorrhage caused by a skull fracture. It was a hopeless case and the patient died the next morning.

Quartermaster Sergeant Instructor James Finmore, R.E. described how dinner at the Swan had been followed by a concert at which Sergeant Hubbard had sung “Cheery-O”. The men had been taken to and from the party on motor lorries, with the exception of those who had their own machines and the Sergeants. As he returned to Houghton Regis about a mile from Leighton he saw Sergeant Lefevre off his machine; he stopped and found Sergeant Hubbard lying unconscious beside the road. The injured man was placed on the second lorry which was standing by and taken to Houghton. Sergeant Hubbard knew the road quite well and was perfectly sober. Sergeant John Lefevre said Sergeant Hubbard had passed him on the way from Leighton; some way further on he came across the man and his bicycle in the road. He spoke to Hubbard and shook him gently but got no response, so he made him as comfortable as possible. He believed Sergeant Hubbard’s light went out as he was approaching the corner and with the thick dust of the road and the tyre coming off it was impossible to control the machine.

Police Inspector W. G. Purser had examined the road at the accident spot. In the thick dust he could see the track of a motor cycle which had lost a tyre. The bends in the road were not dangerous and Sergeant Hubbard had passed both. A verdict of “Accidental Death” was returned. The dead man was 31 years old and had previously  ridden professionally for the B.S.A. Co. He leaves a widow and three children at West Ham.