Escaped Prisoners Presented to the King 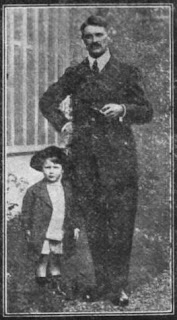 Saturday 25th March 1915: Sergeant Alfred Birley of Victoria Road, Bedford arrived home most unexpectedly on Thursday evening after escaping from Germany. He had been held as a prisoner-of-war since 29th October 1914 when he was captured at Ypres while trying to retake a lost trench. He was able to make his escape with a comrade, Private Haworth of the Coldstream Guards, who was previously a policeman in Lancashire. Unfortunately the most exciting parts of the story must remain secret for the time being as they have been forbidden to disclose the details of their adventures by the War Office. If the article which appeared in Wednesday’s Daily Chronicle is correct the two men cut through the barbed wire around the camp and walked to Holland, living for three days on nothing but apples.

Sergeant Birley has been able to tell his story to no less a person than His Majesty King George V. On Friday he received the news that he and his comrade were to be presented to the King; the Sergeant and his wife travelled to London today for that purpose. He was delighted with the interest that the King took in his adventures, saying: “I was much surprised at the way in which his Majesty put us at our ease. It was just like chatting with a friend. He congratulated us on the success of our venture, and showed by his conversation that he took a keen personal interest in the welfare of the British prisoners in Germany … Every now and then the King slipped in a quiet question, or broke out with a jolly laugh at some of the funny things. He really seemed to appreciate the sport of the thing.” His decision to escape was spurred by the news that his brother, who is a dispatch rider in France, had been awarded the Distinguished Conduct Medal, following which he thought “Well, if he could do that I’m going to do something”.

Sergeant Birley served in the Army for some years and spent time in South Africa. He was a reservist when the war broke out and immediately rejoined the 1st Gloucestershire Regiment. Although he is a native of Lancashire, the town of Bedford can almost claim him as one of its own. His wife is the daughter of Mr. and Mrs. George Gibbs, of Victoria Road, and both he and his sisters have lived in Bedford. He has two sisters who have been teachers in the town, including the Miss Birley wo was formerly Head Mistress of the Priory Street Infants’ School. It is believed that Sergeant Birley will be speaking at a recruiting demonstration in Luton next Saturday.