A Near-Miss in Bedford 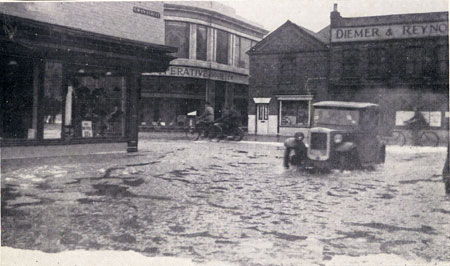 Monday 20th September 1915: A near-miss took place in Bedford this morning which could easily have led to tragedy. A large Army motor transport heading in the direction of the station turned right from Gwyn Street[1] into Midland Road into the path of a powerful motor car driving fast in the direction of the High Street. The driver averted a collision by swerving to the right, mounting the footpath near Messrs. Diemer and Reynolds’ printing works, drove round a street lamp, returned to the middle of the road and continued without stopping or reducing his speed. Fortunately there were no pedestrians on that part of the pavement, although there were many people nearby and a good number of vehicles on the road. The army driver braked so violently that several yards of tar-macadam on the road was damaged. That no accident took place and that nobody was injured or killed is a piece of extraordinary good fortune.


[1] Most of Gwyn Street, which originally ran from Bromham Road to Midland Road, has since been demolished.
Posted by Kathryn at 07:00