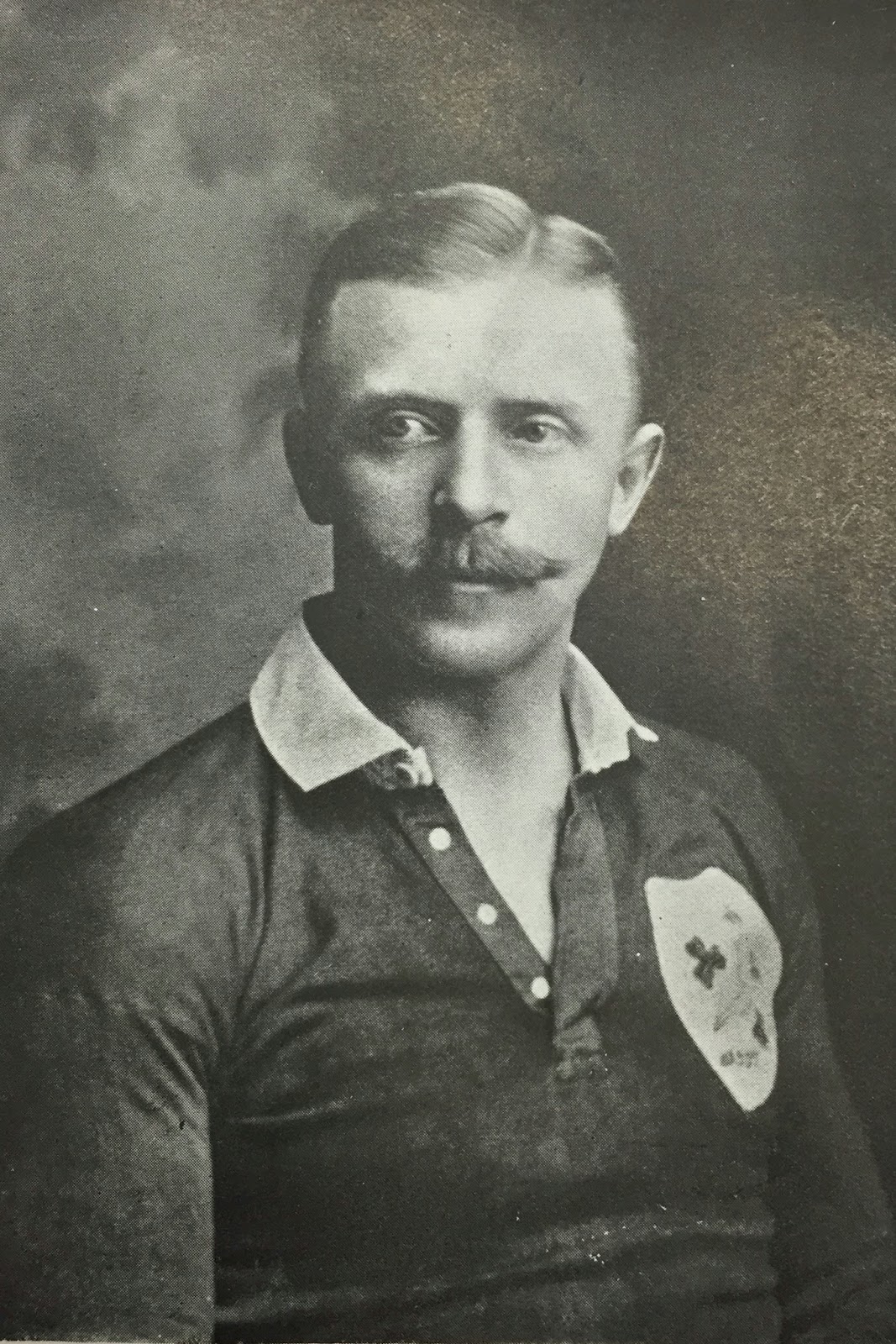 Friday 4th June 1915: News has reached Bedford that Captain Basil Maclear, who attended Bedford School from 1893 to 1899, has been killed in action at Ypres. One of the finest backs ever produced by the school Basil Maclear played centre three-quarter for the Irish Rugby team from 1905 to 1907, becoming one of the most famous players of the day. An all-round athlete, he also played for the school cricket XI and ran the hundred yards at the Bedfordshire County Sports in 10 seconds. From Bedford he moved on to Sandhurst where he represented the Royal Military College at cricket, Rugby and athletics. After serving with the Royal Dublin Fusiliers in the Boer War and in Ireland he became a gymnastics instructor at Sandhurst. With extraordinary speed for a man of his size, Maclear was near impossible to tackle once in his stride. The try he scored against South Africa in November 1906 after an 80 yards’ run was unforgettable to anyone who witnessed it. As a player he has been described as “forceful rather than subtle … he was dangerous in attack and formidable in defence, running straight and hard, and handing-off with a force which was only equalled by the tremendous vigour of his tackling”.

At the beginning of the war Basil Maclear’s desire to rejoin his regiment and go to the Front was thwarted as he could not be spared from Sandhurst. In a confidential report General Capper wrote “This officer is too valueable to be spared for active service”. This comment was later crossed out at Maclear’s request and he left the Royal Military College at the end of February. He took a large draft of men to the Front around March 24th and remained at the Front with his own regiment. When the 2nd Battle of Ypres began the Dublins were rushed to the front line where Basil Maclear took part in all the heavy fighting. For much of the time he was Second in Command of the regiment, and for four days he was in full command. On May 24th the Dublins were defending a line of trenches which offered little protection against enemy fire. At 3 a.m. the Germans launched a heavy gas attack which caused the defenders to fall back. The Colonel of the regiment was killed early in the attack. Maclear appeared impervious to the effects of the gas and helped the men around them to put on their respirators. In the middle of the morning he led a bombing party against the advancing Germans, shouting “Come on! Do you want any more?” when he fell, shot through the throat. He died almost immediately. When the order came to withdraw that night only thirty men remained from an entire battalion.

Basil Maclear was the youngest of five brothers. One elder brother, Brevet-Lieutenant Colonel Percy Maclear, was killed on 30th August 1914 in the Cameroons while commanding the 2nd Nigeria Regiment of the West African F F.[1] The other three Maclear brothers are also serving army officers.[2] A man “made of a rare clay, with the courage of a lion and the heart and lovable nature of a child”, he will be greatly mourned. A great friend of Captain Maclear has paid the following tribute: “No School ever produced a greater or more versatile athlete. His quite unusual physical powers enabled him to excel in all forms of manly exercise; but no success or praise ever spoilt the simple modesty of his disposition. A born leader of men, he was himself the embodiment of unassuming manliness, to which was added the most generous, open and kindly nature, which saw the best in all men, and drew the affection of all.”

[2] A third brother, Lt-Colonel Harry Maclear DSO, East Lancashire Regiment was killed in action in March 1916 while commanding the 13th Royal Scots. The remaining two brothers survived the war. One, Arthur Maclear became known as a miniature painter; the other, Lt-Colonel Ronald Maclear had also been a noted Rugby player, playing 48 county matches and appearing for England vs. The Rest of England.
Posted by Kathryn at 07:00