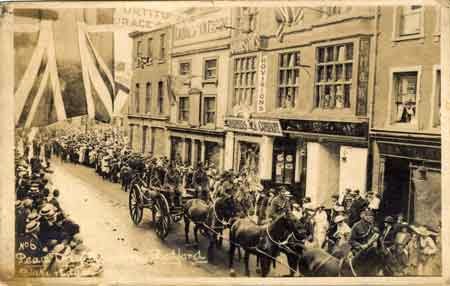 Thursday 17th June 1915:  A gun team of the 4th Glamorgan Battery of the 2nd Welsh Royal Field Artillery was involved in a serious accident at Bedford this morning. Driver A. Gale and Gunner J. Williams were driving their gun carriage along London Road in the direction of St. John’s Street when something went wrong with the harness. The horses bolted along the railway bridge in St. John’s Street, crashing into a wall at the corner of St. Leonard’s Avenue. Gunner Williams jumped from the carriage and fell under one of the wheels; Driver Gale was also thrown to the ground. The men were taken to hospital where Gale was found to have suffered injuries including a compound fracture of the left hand; Williams has a broken leg and bruising. One of the six horses pulling the carriage was also severely injured.