An Appeal to the Men of Luton 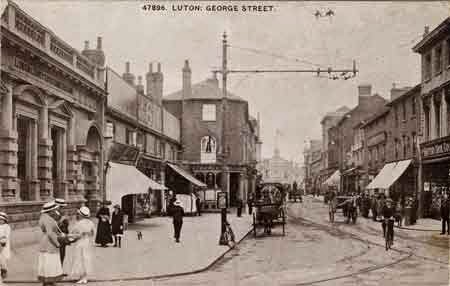 Monday 14th June 1915: A Luton man serving at the Front has sent an appeal to all the single men of Luton who are able to join up but have failed to do so, men he calls “worse than useless, because the fact of your idleness must cheer the hearts of the enemy”. He tells them “Your consciences must be unusually and damnably elastic. Can’t you see what it means, this indifference of yours? Every extra day of war means so many glorious English bodies laid under the turf, so many properties destroyed, and so much, ever so much, money wasted. That is what your indifference means, for it stands to reason that an increase in our numbers must hasten the day of peace.” He wishes that some of these “leisurely” men could visit him in France where he would show them three sights. First he would make them proud of England by showing them the marvellous organisation at base which keeps an army fed, clothed and armed. Secondly he would show them one of the nearby villages where nothing remains of the church but the crucifix at the altar, where the roads are torn up by shell holes, and where it is barely possible to tell that there were houses round the square, and ask them to imagined “dear old Luton knocked about like this”. Finally he would show them a burial party coming from the trenches at night to the battalion burial ground where they lay “the body of the man who has done his share. It is a very sad sight, but at the same time thrilling”. He believes anyone left unmoved by such sights must be a hopeless case.

The anonymous correspondent wrote his letter “simply to relieve my feelings a bit. It makes my blood boil to think of the thousands of slackers there must still be at home”. He tells his readers “to search your consciences, think hard, and be a man.” Yes, their lives will not be so comfortable, but even a stable or a dug-out becomes welcome as a place to sleep on active service. And as for their mothers or sweethearts, even if they are sad at parting “their tears will soon be turned into smiles of pride and admiration on realising that you are at last doing your duty”.