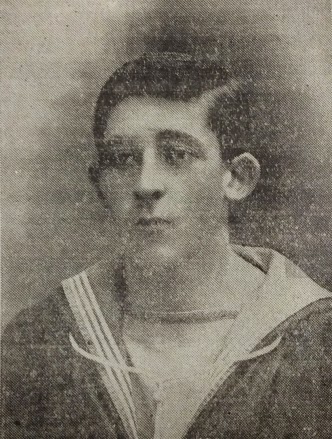 
Wednesday 31st March 1915: News has reached of the death of 22 year old Able Seaman Ralph Stuart Adams. He was serving on HMS Inflexible which was badly damaged in the Dardanelles last week, having survived the of the last December. Adams, who was an old boy of , joined the Navy about seven years ago. When he last returned to two and a half years ago he was stationed at ; after which he spent time serving in the . The last letter received by his parents was written on March 1st, when he said he was quite safe and sounded very cheerful. His brother is serving with the Royal Engineers and is currently stationed at .

Another sailor who also took part in the of the has experienced better fortune. Able Seaman F. W. Dear has just returned to his ship HMS Essex after spending a few days with his parents at . He has described his experience of the battle in which “terrible firing took place for eight hours, and we could see the enemy’s ships go down one after the other; there were four sunk altogether, and fortunately there was no damage done to our ship, and there was not a single casualty. We did not lose any ships in that battle.”  Since leaving the Falklands his ship had carried out patrol work in the North Atlantic and has recently escorted three Canadian troop ships across to the Irish Sea, from where it came on to England.