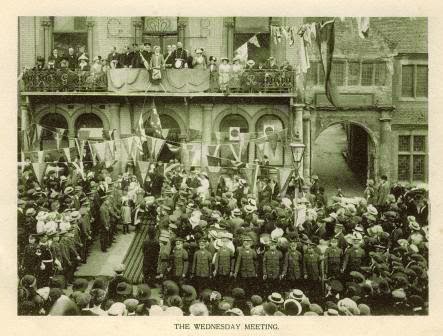 Friday 19th March 1915: The head teachers of rural elementary schools in the county have made returns of the number of men serving in the armed forces.[1] According to the 1911 Census the places for which returns have been received had a population of 81,023, which includes 11,639 men of military age (19 to 38). The numbers who are either now serving in the forces or who volunteered but were rejected are:
This makes a total of 4,446, which is 5.48% of the whole population and 38.2% of the men of military age. The breakdown of those serving in the Army is as follows:
In eight villages – Bromham, Caddington, Cardington, Kensworth, Milton Ernest, Potsgrove, Stondon and Old Warden - recruitment has reached 10% or more of the total population with Cardington taking top place with a figure of 11.8%.

The strength of the Territorial Units has grown threefold since 1st January 1914. On 1st January 1914 it was 1,459; this increased to 1,945 on 1st July 1914, to 3,861 on 13th November 1914 and to 4,389 on 16th March 1915. This most recent figure can be broken down into individual Units:
Of this total of 4,389, Kempston and the village districts for which returns were made by head teachers contributed 1,301, with 3,088 coming from Bedford, Luton, Ampthill, Biggleswade, Dunstable, Leighton Buzzard and Sandy. If the proportion of recruits to the Territorials from these urban areas is similar to the proportion who have joined the other branches of the Forces, then the total number of men recruited by the Army and Navy from Bedfordshire can be estimated at 13,329. If this is correct it would mean that the county has sent 46% of the available men of military age and 6.8% of its total population of 194,588.

Source: Bedfordshire Times, 19th March 1915
[1] , Luton, Ampthill, Biggleswade, Dunstable, Leighton Buzzard and were excluded from the returns due to their size and the greater difficulty of collecting figures.
Posted by Kathryn at 07:00