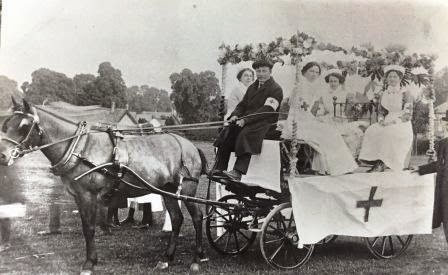 Tuesday 23rd March 1915: Captain John Longuet-Higgins has again written home to his mother at Turvey, this time with the alarming news that he has been wounded at the battle of Neuve Chappelle[1] and is in the No. 2 British Red Cross Hospital at . He tells her:

“If you see my name in the paper don’t worry about it one little bit for I am hardly wounded, though to be sent to . At least I am now certain of getting home. I have a bullet wound in my left thigh – only a flesh wound. It was our Brigade that took Neuve Chappelle and I got hit on the third day of a most violent battle. I can’t describe it and don’t want to think too much about it. I was attached to the Brigadier’s staff after the first day. Casualty list will be very heavy I am afraid.”