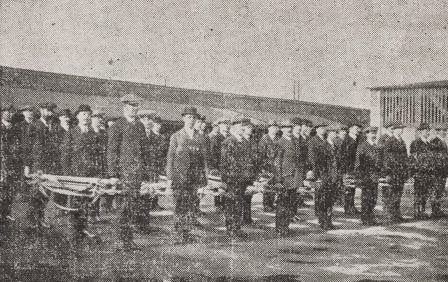 Tuesday 9th March 1915: A report received on the No. 3 Bedfordshire Detachment of the British Red Cross gives an insight into what the work of a Red Cross Detachment entails. The Company was enrolled in August 1914 thanks to the efforts of Colonel W. M. Dawes, and under his command has held three drills or practices every week. The Company now has 56 members, with Lieutenant-Colonel H. A. F. Nailer acting as Medical Officer and Mr. F. Perkins as Pharmacist. Thanks to the hard work of its Instructor Quartermaster S. W. Adams it has achieved a high level of efficiency. The Company has three Section Leaders, each controlling a complete section of stretcher squads. It has now been suggested that these should be at the disposal of the Commandants of the Red Cross nursing stations in if needed to transport the sick and wounded between the railway and the hospitals.

All the men have been trained in first aid work and in methods of carefully handling and conveying patients; many are also skilled in ambulance work. The Detachment still has vacancies for recruits, and it is hoped that if there are enough volunteers a fourth section can be added to the Company. Most of the members are business men who, due to age or other reasons, are not permitted to enlist in the Regular or Territorial Forces. As they are only expected to serve in the area the Company provides an opportunity for men who would like to be trained and ready as part of an organisation available for use in time of emergency, but who are unable to leave home. This is particularly interesting work, and new volunteers will be gladly welcomed.