Last Moments of the Irresistible 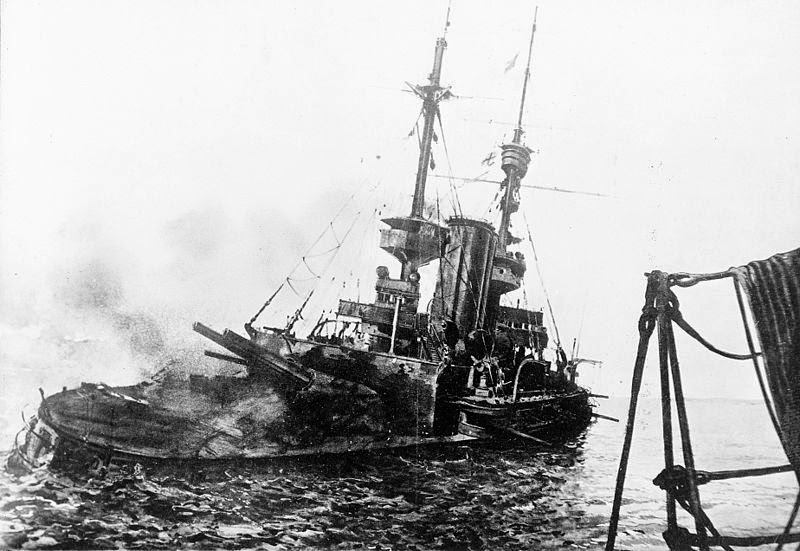 Sunday 21st March 1915: Casualty lists issued by the Admiralty yesterday show that three officers of HMS Irresistible have been killed, including Artificer Engineer Arnold Wharton, the son of Mr and Mrs Henry Wharton of 78, Hampton Road, Luton. Arnold Wharton had been home for Christmas, at which time his ship was still on patrol work in the . On February 1st Irresistible was sent to where she took part in the bombardment of Turkish forts and provided support for the initial landings of British troops at Gallipoli. On 18th March she was severely damaged when she struck a mine and drifted helplessly into a hail of heavy fire from the Turkish guns. The majority of the crew were rescued by other British ships, but 150 men were killed.

Arnold Wharton, whose family came from , served his apprenticeship in the engineering trade and became chief enginewright at a Derbyshire colliery. Shortly before he turned 21 he joined the Royal Navy as an ordinary artificer. He was first promoted five years ago. A studious young man, he became a master of both the practice and theory of naval engineering and had recently passed the examination for proportion to Engineer-Lieutenant. He had previously served on HMS Gladiator, transferring to another ship only a few weeks before Gladiator sank following a collision with the American steamer SS Saint Paul off the in 1908. Engineer Wharton married Alice Spencer in 1905 and leaves a widow and three young children at their home in .

Mr Henry Wharton has received a number of touching letters of sympathy on the tragic loss of his son from his colleagues at Commercial Cars Ltd. Despite being a strong opponent of war in general, Mr Wharton has been reported as saying “I don’t begrudge it. The loss is heavy, for he was a fine son, and was making good headway, but for the cause I don’t think any sacrifice too great. If it had been an ordinary commercial, capitalistic war, I should have begrudged it. But we look on this war in a different light, and I believe the lad, if it was possible for him to speak, would say the same”.