A Recruitment Meeting at Eaton Bray 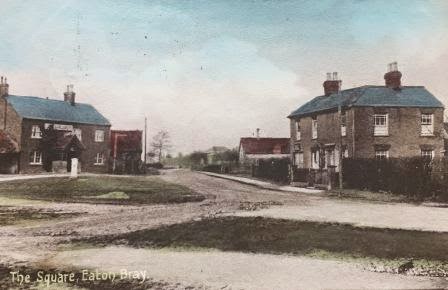 
Wednesday 10th March 1915: A recruitment meeting held at the National School, Eaton Bray yesterday evening was well attended. The meeting was organised by the South Beds Recruiting Committee, presided over by the vicar, Revd. E. Sutton, and included a varied concert programme with a comedian, Mr Edgar Wane, and the drum and fife band of the Luton Volunteer Training Corps among the entertainers.

Revd. Sutton said that if the country was conquered by the Germans certain things would be governed well, such as sanitary matters, but that autocracy would replace our free institutions and men should be willing to lay down their lives to protect our priceless liberty. Mr Hugh Cumberland hoped that Eaton Bray would improve its recruitment record. The 5th Beds Reserves were short of 250 men, and the 5th Battalion could not be deployed until the Reserves were fully manned. He did not think the Reserves would see any fighting “but if they did and lost their lives, well – it was a noble end”.

Mr H. Inwards, secretary of the South Beds Recruiting Committee, also appealed for the eligible men in the village to join the Bedfordshire Regiment, and pointed out that Mr Cumberland had a gallant son in the Bedfords and also two daughters engaged in Red Cross work. He had been visited by Major Brighten, commanding officer of the 5th Beds, who had warned him of the urgent need to strengthen the Reserves. Both Major Brighten and the Lord Lieutenant had told him that in the 1st Battalion the Bedfordshire Regiment had one of the finest fighting units in the country.

Mr Inwards read an extract from a soldier’s letter sent from near La Bassee where heavy fighting was going on; the writer could not comprehend why men at home did not feel a sense of urgency to protect their country:

“As we see and realise all the destruction caused by the enemy, we citizen soldiers are glad that we are here, for we know that we might have seen this havoc in , and we might have seen our homes ruined, our churches desecrated. And yet they tell us that there are those at home who still regard their personal comfort as of more importance than their country’s safety! Is it that they do not realise what this war means? What will rouse them from their awful lethargy?”

Colonel Fenwick, a former officer of the Dorsets, drove over from Tilsworth to join the meeting as an unofficial speaker, asked “Why should the Vicar’s three sons and my son fight for you, and men eligible to go do not do so? Every family from the highest to the lowest should be represented“. His son, home recently on a short leave from the trenches, hoped that more men would be sent out as “the Germans were jolly good fighters, and the Allies were up against a tough thing”.