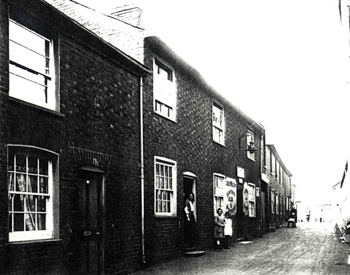 Tuesday 30th May 1916: Mrs. Rose Phillips of 25 Friday Street, Leighton Buzzard, has appeared at the Leighton Buzzard Police Court charged with permitting the premises to be used as a brothel. The defendant, a “tall, smart looking woman” aged 23, whose husband is a soldier at the Front, was allowed to be seated during the hearing. All women were asked to leave the court. Police Sergeant Dennis stated that he had known Mrs Philips for some months and had kept observation on the house from 25th March. At various times he had seen men and women enter the house between 11 and 12 p.m., both in couples and singly. Another girl lived with Mrs Phillips, although her parents lived in the town. He gave the names of a soldier and other men he had seen visiting the house, but admitted he never actually saw anything wrong between the parties who went there. Two other policemen had seen men entering the house and observed Mrs Phillips associating with men in the street. One had seen her behaving familiarly with two men at the corner of Friday Street and had heard her say to them “Let us come to business”.

Mary Adcock, the wife of the licensee of the Royal Oak next door to the defendant’s house, said Mrs Phillips had been in the public house with men, left by the back way and went with them to her own house. On the day after Good Friday she had two girls and two men with her. They went into 25 Friday Street at 3.30 p.m. but she did not see them come out. On Easter Monday another man bought some sandwiches at the pub then went to Mrs Phillips’ house; again she did not see him leave. She had occasionally been into her neighbour’s house but had never seen any “impropriety”. Thomas Underwood of 6 Friday Street lived opposite Mrs Phillips. He had also seen men visit the house; some came out drunk and he once saw a man leave at 4.45 a.m. He had given Mrs Phillips his opinion of her character and told her she should be ashamed of herself. He did however admit that despite claiming to have a “pretty good character” himself he had been convicted about thirty times for poaching and drinking! His wife Emily Underwood stated that two other women were living with Mrs Phillips, and she had often seen men coming out at about one in the morning. There seemed to be some suspicion that Thomas Underwood had himself wished to “visit” Mrs Phillips but had been refused.

A police sergeant from Winslow (Bucks) told the court he had known Mrs Phillips for 4½ years. Her husband had been a respectable farm labourer before he was called up. At the end of 1914 he had warned her to behave herself. She had told him she was doing nothing wrong and “there was no harm in talking to soldiers”. In December 1915 her house had been placed out of bounds for the men of the 2/5th Norfolks stationed at Winslow. She moved to another address, but soldiers used to stay with her for weekends and the landlord gave her notice to quit. She had then moved to Leighton Buzzard. Mrs Phillips’ solicitor submitted that all the evidence was circumstantial and there was no case to answer; nobody had proved that anything wrong had happened at 25 Friday Street. The magistrates disagreed. Mrs Phillips was convicted and sentenced to one month’s imprisonment with hard labour. An appeal was made for a fine as an alternative as Mrs Phillips had four children aged under five, but the magistrates refused. When told her fate Mrs Phillips laughed and said she did not mind, but then broke down and sobbed bitterly.