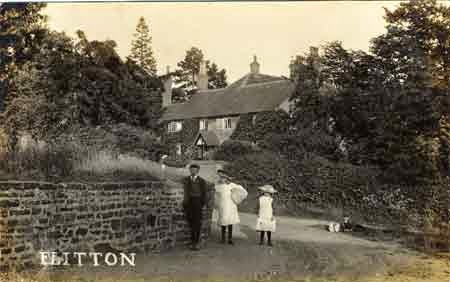 The Old Vicarage, Flitton [Z1306/49/5]
Barton-le-Clay
A Volunteer Drill Class is to be formed in the village. Permission is being sought from the Chief Constable for P.C. G.Setchell to be appointed Drill Instructor. The Class is to be held each Friday evening at 7pm. P.C. Setchell has already given a weekly drill for many months to some 25 lads, many of whom have joined the army and have found his instruction most useful. It is suggested that the ancient habit of universal military instruction should be revived. The reverse of the large 14th century picture of St.Nicholas in the shows a village scene of youths practicing with the crossbow. It is said that the yew trees in churchyards were planted to supply wood for the bows, and many stones are found in old churches where men sharpened their arrow heads.

Trooper W. Frost of the 1st Dragoon Guards returned to the village on 72 hours leave. He has been in fifteen “scraps” since November but has come through unscathed except for frost-bite. He only once felt down-hearted, when in the trenches with frost-bitten feet, wet to the skin, chilled to the bone, and wearied from want of sleep. When a sympathetic officer asked how he felt he said he almost wished a bullet would finish him off. The officer told him to “stick it”, and “stick it” he did.

Gravenhurst
Christopher Arnold White and Adeline Standbridge Parrish were married in January and are congratulated on their decision to do their duty. The groom is to go and fight for King and country, and the bride has given her consent that he should go.

Flitton and
The new Boy Scout Troop made its first public appearance at Church Parade on Sunday 24th January.

Westoning
More men have gone from Westoning for training and their names have been added to the list on the Church Notice Board. A list of those who have had to return through being medically unfit, and of others who have offered but been turned down for the same reason, has been added.

Clophill
The village are exceedingly happy to have such a splendid set of men billeted among them. Twenty six men from the village are serving at the Front or in the Royal Navy or have been wounded, and a further thirty are also serving. Thanks have been received for a truck of vegetables sent to be distributed among ships based at Harwich. Sir Arthur May, Director General of the Medical Department of the Royal Navy writes: “Looking at your work from a Medical point of view it is difficult to overestimate its value; the supply to the Ships’ Companies of really good fruit and vegetables, locally practically unobtainable, is in my opinion of the greatest benefit, it is, I am sure, an important factor in the present most satisfactory low rate of sickness in our ships of the Grand Fleet”.

Silsoe
Sincere sympathy goes out to the young widow of Frederick Laird of the Bedfordshire Regiment who has been killed in action.[1] Captain Lumley Jones, Adjutant of the 2nd Essex Regiment, has been welcomed home for a short but well earned west from his duties at the front. Almost immediately on his return to his regiment he was wounded by a rifle bullet. Fortunately the wound was not serious and he has completely recovered. Two more parishioners, William Novell and Samuel Wiffin have volunteered for service and be accepted, though for both of them the medical inspection meant the loss of practically all their teeth. Malcolm Cook has been successful in obtaining a Writership in the Navy and will commence his duties shortly.


[1] Frederick Laird of the 1st Battalion of the Bedfordshire Regiment was killed on 10th December 1914 and has no known grave. He had married Julia Brothers only a few months earlier. She gave birth to a son, Frederick Harry, early in 1915. His entry in the National Roll of the Great War reads: “He was mobilised on the outbreak of war, and almost immediately proceeded to France, where he fought in the retreat from Mons and in subsequent engagements on the Marne, in which he was wounded and sent to a base hospital. Recovering from the effects of his wounds he returned to his unit, and took part in the Battles of La Bassée and Ypres, and was killed in action near on December 11th 1914”. He lived at , Silsoe.
Posted by Kathryn at 07:00