Kitchener vs. Kitchener's Men and a Tragic Motor Accident 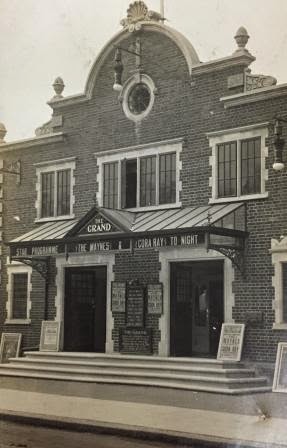 Monday 22nd February 1915: Leighton Buzzard continues to provide facilities and entertainment for the troops billeted in the town. The programme at the Grand Cinema this week includes showings of “The Loss of the ” tonight, tomorrow and Wednesday, and Keystone comedies are regularly included on the bill. A branch of the Soldiers’ Christian Association has been formed and the first meeting was held last Tuesday in the Bible Class Room at the Wesleyan Chapel in . Across the road in the schoolroom a ping pong tournament was held on the same evening. More competition was provided at the same venue on Friday when Mr H. O. Kitchener of Leighton Buzzard took on twenty-two of the men of Lord Kitchener’s Army in simultaneous games of draughts. The final score was Kitchener 19, ’s Men 2, with one game drawn.

On a sadder note the non-commissioned officers and men of the 15th Platoon, D Company of the 8th Lincolnshire Regiment have sent a wreath to the funeral of their seventeen year old officer Second Lieutenant William Crabtree, who was killed in a taxi-cab accident near Tring on the morning of Wednesday 10th February. The young man came from and had been staying at Castle House in Linslade. At the inquest into his death it was stated by the taxi driver, Alfred Hodge of Lambeth, that he picked Lt. Crabtree up outside a club in Tottenham Court Road between 4 and 5am, having already collected another officer and a lady in . The young man sat in front with Hodge, although he was asked by both the driver and the other officer, Second Lieutenant Cowes, to ride inside with the other passengers. Hodge was travelling at about 16 mph when he saw a sharp bend and slowed to about 10 mph. As they were on the bend the near side front tyre burst, causing him to run on to the bank. Knowing the car was likely to overturn he accelerated to run along the bank until he could right the car in the road again. This weight of the car on the near side rear wheel caused the wheel to collapse. In trying to right the car again he collided with a post at the bottom of a stile and went over onto the near side of the cab.

The driver helped out the first officer and the lady but Lt Crabtree was underneath. They managed to lever the car up with a piece of wood and dragged him out.  When he was pulled out from under the car Lt Crabtree said “I’m all right” but there was blood on his face and the lady ran to a cottage for help. Dr O’Keefe of Tring  found that his face was badly cut, his breathing was very rapid and he was in great pain. He died from shock brought on by an injury to his lung caused by a broken rib which resulted in a haemorrhage. The jury returned a verdict of accidental death and asked that a caution sign should be erected at the spot where the accident happened.