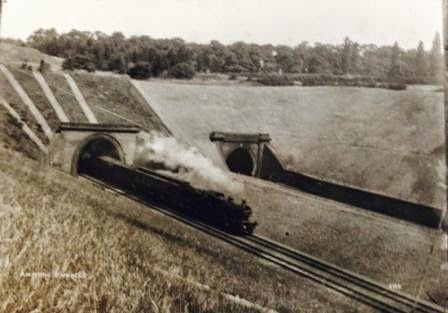 Barton
Vegetables, fruit and eggs sent for the Harvest Festival have been divided between the () and the patients at . Mrs Frederick Timms has collected £6 12s 9d with which she has purchased material for making eighteen nightshirts, two dozen handkerchiefs, one dozen blankets, and some knitted cuffs. She has also raised sufficient funds to supply 2,000 cigarettes and 10 ounces of tobacco.[1] Five blankets have been given which will be sent for the Bedfordshire Regiment. The Reverend C Charlesworth gave a lecture on the war in the to a packed audience which raised £5 towards the Belgian Relief Fund.

Westoning
Some of the men away training have returned home on short leave. Mr Peppiatt, who was present at the taking of has been back for a few days to see his wife and children. Herbert W F Higgs, the eldest son of Mr and Mrs William Higgs, has enlisted in the Naval Air Section and will be stationed at Sheerness. He had previously worked for Mr Grimmer at Ampthill, for the General Omnibus Company, and at the Motor Works, .

Flitton and
So far there has been no shortage of food, and it is hoped that parishioners realise how much they owe to the ceaseless vigilance of the Navy. Lantern views and war slides on will be shown on November 4th and on on November 18th. Socks are being knitted for soldiers by the girls of , and £1 15s 0d has been collected in the parish for a Wool Fund.

Clophill
The Scouts have been withdrawn from guarding the Ampthill Tunnel and are mounting guard at the Waterworks every evening. This will be much more convenient, especially as the Authorities are supplying shelter and fire. The Council are to issue special War Badges to all scouts who do a certain amount of public duty during the war. “Nearly every one of our boys have already earned the Badge. Why not all? Buck up the few slackers.”

Silsoe
Captain Lumley Jones, of the 2nd Essex Regiment, has been made a Member of the Legion of Honour, one of the highest distinctions the French Government and War Office have to grant, reserved for those who have performed a conspicuous act of bravery.[2] It is not yet known what feat won Captain Jones this honour.  Only a few days earlier he had been mentioned in dispatches by Sir John French.

[1] A letter of thanks to Mrs Timms of Barton was printed in the Luton News of 5.11.1914.
[2] Captain Lumley Owen Williames Jones is commemorated on the Winchester College At War website. He died of pneumonia brought on by influenza in September 1918 and is commemorated on the Silsoe war memorial. His parents and sisters were living in Silsoe in 1914.
Posted by Kathryn at 07:00