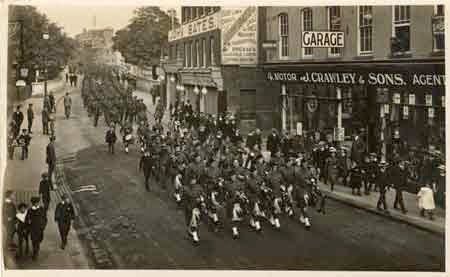 Tuesday 23rd February 1915: Private Joseph Scott has been sentenced to three months’ hard labour by Dunstable magistrates for obtaining food and lodgings from Mrs Laura Bandy by false pretences between January 8th and 16th. Scott claimed to have been wounded at and that he was receiving medical treatment at . He wore his uniform, his head was bandaged and his left hand was in a sling. Sympathetic to this wounded soldier, Mrs Bandy agreed to let him rooms in her house at , Dunstable, for 18 shillings a week which he said he could easily afford out of his army pay. In fact Scott, a Seaforth Highlander, had never been at the Front and had deserted from the Salamanca Barracks at .

Mrs Bandy said Scott had told her he had been bayoneted in the arm at and that he would receive his money by the Thursday. He claimed that two of his brothers had been killed at the Front, and that he had two sisters acting as Red Cross nurses. Police Sergeant Tingey gave evidence that he had seen the prisoner in in the afternoon of February 15th. Scott said that two fingers of his left hand had been blown off, but when accused of being a deserter from the Seaforth Highlanders he admitted this was the case. When he was later charged with false pretences he said “very well”. Scott pleaded guilty to the magistrates and said he had nothing to say. It was disclosed that he had four previous convictions in for fraud and theft between 1911 and 1913. He had enlisted with the Seaforths late in 1914 and deserted on December 27th. The Mayor told Scott he had disgraced the King’s uniform and anticipated he would be dealt with by the military authorities at the end of his three month sentence.