Two Soldiers In Court At Dunstable 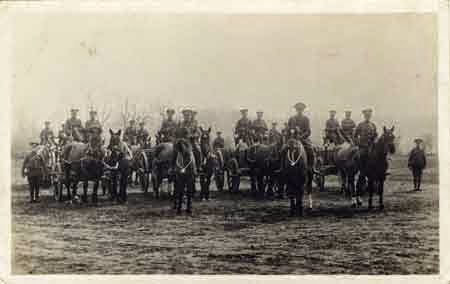 Tuesday 2nd February 1915: Two soldiers have appeared before Dunstable magistrates today charged with theft. Private William Wardle of the Army Service Corps pleaded guilty to stealing two £1 notes from Mrs Barbara Butcher at the house in where he has been billeted. On January 22nd Mrs Butcher put her purse in a cupboard in the living room; on the 26th she discovered the notes, which were her payment for billeting soldiers, had gone. After the loss was reported a Sergeant of the Army Service Corps interviewed Wardle and another soldier. Both denied seeing the notes, but when Wardle was asked to produce whatever money he had on him it included one of the missing notes. He claimed to have found it on the floor, but later admitted to a Police Sergeant that he had taken the £2 and had spent £1 on a watch and other items. An officer reported that Wardle’s conduct had been fairly good and the prisoner said he liked his work in the Army. Despite the seriousness of the offence the magistrates dealt leniently with Wardle because he was a soldier. He was given a £1 fine with the alternative of 14 days hard labour. Private Wardle said he would pay the money in two weeks.

Another soldier from the Army Service Corps, Private William Crossnan, was charged with stealing two brooms and a brush, worth 2s 1d, which had been hanging in the doorway of the grocer’s shop of Edward Thomas Buckle at 48, Victoria Street on 27th January. Private Crossnan was caught carrying the stolen items and taken to Police Inspector Purser, telling him “I am fed up with the service. They have not been paying me, and I am half starved”. He pleaded guilty to the theft and claimed he took the items while under the influence of drink. Inspector Purser said that although the soldier had been drinking he was not drunk. Private Crossnan insisted that he stole the brushes because he was drunk, not to get his discharge. Inspector Purser told the Bench that he understood the military authorities did not want Crossnan and would be glad to get rid of him. Crossnan had enlisted immediately after serving a prison sentence and had a very bad record, including six convictions for stealing and other offences. He was sentenced to a month’s hard labour.