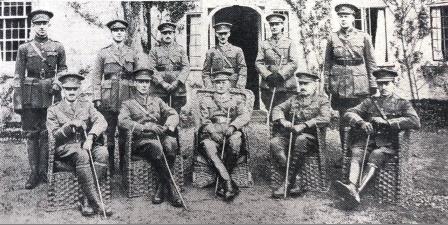 Sunday 7th April 1918: This weekend has seen the Bedfordshire Motor Volunteer Corps taking part in a highly successful camp. The Corps was formed about three months ago, and this is the first time they have paraded as a whole. The Corps is divided into four local sections under the overall command of Captain Frederick Ray: Bedford; Luton; Biggleswade and Sandy; Dunstable and Leighton Buzzard.

The camp has been held in the west end of Kempston at Rushey Ford Farm, which was purchased by Captain Ray last September. The units reached the camp on Friday evening and enjoyed a fine, but cold, night sheltering in either covered vans or a large barn. In the morning hot cocoa and a biscuit were served at 6 a.m. before the Corps paraded for a short march and physical exercise. After a day of parades an excellent evening concert was held in a barn. A toast was given to “The Officer Commanding” who congratulated the Corps on their excellent attendance, despite the camp causing many of them to give up their most profitable day’s work of the week. He particularly commended the Biggleswade section, from which 43 out of 45 members were present.

After settling down for the night a successful emergency mobilisation was staged. Within three minutes of the alarm sounding the men were on parade, and in a few more minutes the transport vehicles were on the move through the darkness. This morning the Corps attended a church parade in front of the house. Training carried on over the weekend has included mechanical training and lectures in map reading for dispatch readers.