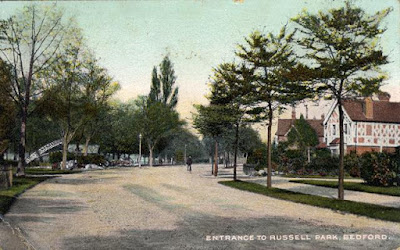 Thursday 3rd October 1918: This morning a medal presentation ceremony has taken place in Russell Park, Bedford. A large number of troops marched through the town shortly before 11 o’clock, headed by two bands of the Royal Engineers. The medals were presented by the General Officer Commander-in-Chief, Eastern Command, Lieutenant-General Sir C. L. Woollcombe. The General was slightly late arriving as his car broke down between Bedford and Luton. The Mayor and Mayoress of Bedford and their daughters were also present.

The medals awarded included two  Distinguished  Conduct Medals. One was awarded to Corporal H. L. Bavington of the Hertfordshire Regiment but presented to his mother, as her son had since died of his wounds. The citation read: “For conspicuous gallantry in action. He led a bombing party with great gallantry, and rendered valuable assistance in the consolidation of the position. He has at all times set a splendid example.” The second was presented to Sapper W. J. M. Baldy of the Royal Engineers “for conspicuous gallantry and devotion to duty. He kept up communication all day while under fire from several directions, and in spite of casualties among the signallers. He did consistent good work during a long period.”

Other medals awarded at the ceremony included the Belgian Croix de Guerre to Sapper J. McKeown of the Biggleswade Depot; and the Military Medal and Bar to Sappers J. Layton, A. Lough and A. H. Cornwall. Twenty one men received the Military Medal and one the Good Conduct Medal. One of the recipients was Sergeant George Gazeley of Westoning,  one of the “Old Contemptibles” who first joined the Bedfordshire Regiment in 1904 and served in India. As a reservist he was called up at the beginning of the war, and by October 1915 had already been wounded three times. He is now permanently disabled after being badly hit in the leg last year. Two other Bedfordshire Regiment men, Sergeant Bertie Pettingell of Hitchin and Private George Henry Musgove of Kempston have also been serving since October 1914; Sergeant Pettingell enlisted when he was only 17 years old.