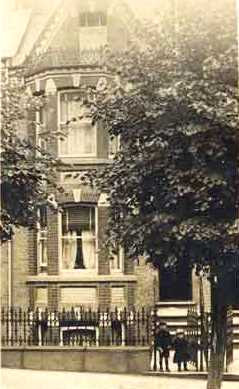 Saturday 28th September 1918: A soldier’s widow has written to the Luton News describing the difficulty she has encountered in trying to find accommodation for herself and her two children. She signs herself “the insulted one”, and it is clear that her situation reflects disgracefully on landlords who refuse to rent property to the widows of those who have given their lives in the service of their country:

“I am the widow of a soldier who was killed in France little more than a year ago. Since his death I have put my furniture in store and have been living with my friends. But there is nothing like a home of your own, however kind one’s friends may be, and lately I have been trying to find a house so that I could have a place to myself once more. On Saturday last I heard of a house to let which would meet my need, so I called on one of the most reputed house agents in Luton and made application for it. Having stated my reason for calling, the agent asked, “Where does your husband work?” I relied that he did not work anywhere. He died in France. “Oh,” said the agent “That’s enough: I shouldn’t let my property to a soldiers’ widow!”  I produced my former rent book to prove my respectability, but he would not even look at it. He then asked, “Where do you work?”  I told him. He then said “If you can get your master to take the house, and he cares to sublet it to you, he can do so, but I shouldn’t care to let it to you!”  I leave it to your readers to judge the quality of the person who can talk like this while he pursues his business and enjoys the comforts of his home unmolested only because brave men have sacrificed their lives and the comfort of their dependents. But what I want to know is this: Am I and my two children, and every other woman and her children, to be debarred from having a home of their own simply because our husbands have fallen in the country’s cause? If so, our husband’s death is our disgrace, and instead of dying to make a bad world better they have made it worse for those they loved most. I do not deny the right of any landlord to let his property to whom he will, neither do I object to him trying to secure himself in his rent; but when the sole ground of his refusal is that one is a solder’s widow, it is surely time to protest, not only for oneself, but for the thousands of others who hear a like reproach.”