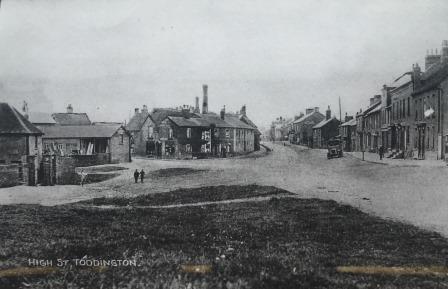 Wednesday 23rd October 1918: Toddington has been badly hit by an epidemic of influenza, with over 150 cases. Both the schools have been closed and almost every family has been affected. At least four people have died in the past week, and many others are dangerously ill after developing pneumonia or pleurisy. Mr. George Clarke, a chimney sweep and market gardener of Leighton Road, died on Tuesday morning after being ill for a week. He was a member of the Toddington Primitive Methodist Church and was well known locally as his occupation took him round all the nearby villages. The Wesleyan Methodist Church lost an active worker and supporter in Mrs. Martha Neale, of St. David’s, Toddington. She conducted a large Society Class at the Church and was a Sunday School visitor, and was known for her “genial and benevolent disposition” . After a short illness she died of pneumonia on Thursday evening. Her death has added to the grief of her family, who have suffered other recent bereavements. Mr. Albert Fountain, a farmer at Cowbridge Farm, also died on Thursday after a very short illness; his wife and child are also dangerously ill. The combination of influenza and pneumonia also took the life of Charles T. Evans of Luton Road.