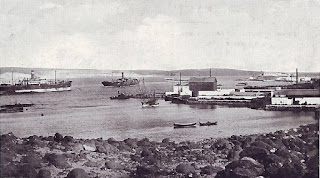 Tuesday 29th October 1918: After fire broke out in the engine room of his ship Second Engineer Edward Banks, the nephew of Abel Bunn of North Street, Leighton Buzzard, spent 101 days adrift in the Red Sea. In a letter to his uncle he describes the experience:

“The fire in the stoke hole burnt for six hours. After a struggle we managed to get it out, but that was not the end of our trouble; the fire burnt a pipe from one of the sea cocks and slowly filled the stoke hole and engine room with water. This put the damper on us for getting steam from the main boilers, so we had to set to and convert the donkey boiler (which is in ‘tween decks) from oil to coal. When we got this finished there was 25 feet of water in the engine room, but after a struggle and plenty of wading, about up to our necks in oil, fuel and water, we managed to get one of the pumps going, and pumped the engine room and stoke hole dry. What a mess things were in! We had to set to again and clean up a bit and to get the fires away again. This took us about six days and we drifted 90 miles out of the track of shipping and had some very narrow escapes of going on to the rocks. The dynamo was destroyed by the fire and water so that we could not send out a message by wireless for help.

After a few days and nights of work we managed to get all ready to make for the nearest port, but just two hours before we were ready to start another fire broke out in the stoke hole, more fierce than the first, and burnt for 48 hours. And, by jove, it did blaze: some parts of the engine room were white hot. Even the ship’s sides in places were red hot, and the decks you could not walk on. It was a good job we were not loaded with benzene (as we have been) or we should have gone up.

This fire eventually died out: we could not do anything but just let it burn. When we were able to get down to the engine room the damage was so great that we could not do anything to get into port under our own steam … When we found we could do nothing the Captain asked for volunteers to sail in the small boat into the track of shipping and hail one of them to come to our assistance; we all volunteered to go, but only four were chosen. The first night they were out a strong gale sprang up and they had a pretty rough time of it. They managed to get to an island (with a lighthouse) in a very exhausted condition, and to the first steamer they passed they signalled, asked the Captain to wireless the position to the gunboats who were looking for us. It was not long after before one of the gunboats came alongside us and towed us to Perim. He was just in time as we had only two days water left, and we had been on our whack for some time. I am pleased to say I am none the worse for my experience.