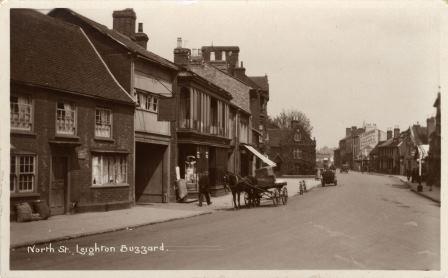 Sunday 6th October: The tide of the war appears to have turned in favour of the Allies and there is real hope that victory is in sight; however, the toll of those killed and wounded continues to rise. Second Lieutenant Vivian Willis, of the Leighton Buzzard solicitors firm W. G. and V. V. Willis, has been wounded while serving with the Tank Corps. He had a lucky escape when a piece of shell flattened a whistle and a watch in his breast pocket and passed down his side, wounding him in both arms and the right thigh, side and hand. He is in hospital at Epsom and is expected to make a complete recovery.

Leading Seaman Frederick Brazier of 3 Friday Street was badly burned in the face, arms and body while serving on a naval ship three weeks ago. He is in hospital at Deal and although the burns are healing it has now been discovered that he has a broken left arm. He has served fifteen years in the Navy and was home on leave from the Mediterranean just a few weeks ago. His wife visited him in hospital and found him cheerful. The son of another resident of Friday Street, Private Harold Butcher of the Suffolk Regiment, is convalescing from the effects of gas. He served for six months in France before being sent to Palestine two years ago, and had only returned to the Western Front within the last three months.

The families of two soldiers now known to have been killed in action have undergone very different experiences, with one enduring a long wait and the other a sudden loss. Private Joseph George Jordan, the husband of Mrs Daisy Jordan of Ivy Cottage, Vandyke Road has been missing for virtually a year. She has finally been notified by the War Office that he is believed to have been killed on or soon after 9th October last year.[1] Mr. and Mrs. George Day of 27 Hockliffe Road have heard that their nineteen year old son, Trooper Cyril George Day, was killed on 5th September, only three weeks after arriving in France.

Sadly enemy action is not the only cause of death for soldiers serving in France. Private Alfred Joseph Dudley, whose parents live in North Street, joined the Army two years ago, and as his fitness only fell into the Class B1 category he was placed in the Royal Army Medical Corps. Service with the Field Ambulance appears to have been too much for his constitution, which was never strong, and he has died of dysentery. He leaves a widow and a three year old daughter.

[1] The Commonwealth War Graves Record for Private Jordan gives his date of death as 9th October 1917. He is commemorated at the Tyne Cot Memorial, indicating that his body was never found.