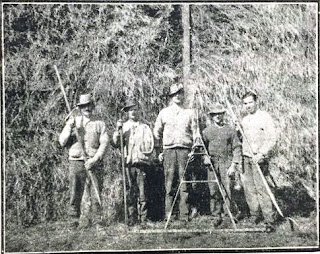 Wednesday 11th August 1915: Wounded soldiers have been helping with hay-making on a farm near Bedford as part of their recovery. They enjoyed their time working in the fields, finding the task of helping with the hay a welcome interlude. One of the men in the photograph above was a convalescent from the Home Army and has now left for the Dardanelles, another had spent months in hospital recovering from frostbite, a third had been gassed, and the other two had both been wounded in the arm.