Bad News for the Rector of Dunstable 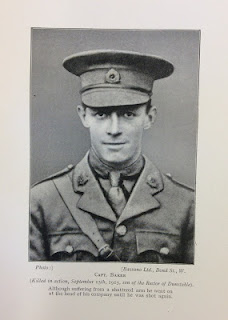 Friday 27th August 1915: Canon William Wing Carew Baker, the Rector of Dunstable and his wife received a telegraph yesterday informing them that their son Captain Charles Tanqueray Baker had been killed in action with the 1/5th Bedfordshires at Gallipoli on 15th August. There were rumours in the town on Wednesday that Captain Baker had fallen, but until the arrival of the telegram yesterday afternoon the Rector had been hoping that the lack of official news meant this was no more than rumour. However, our well-informed man in the Dardanelles reported on his death just the day after the attack by the Yellow Devils on Kidney Hill at Suvla Bay.

Charles Tanqueray was the second son of Canon Baker and at only 22 years old was one of the youngest captains in the army. He had been a chorister at New College, Oxford and had attended Fettes College in Edinburgh. After finishing his education he became a master at St. Ninian’s School in Moffat, Scotland until the war began. He joined the territorials of the 1/5th Bedfordshire Regiment in 1913, was promoted to second-lieutenant within a year, to lieutenant shortly after mobilisation, and to captain last autumn. He was in command of  B Company when he fell.

Canon Baker himself is chaplain to the 5th Bedfords. He wished to go out with the Battalion in that role but the Bishop would not give consent due to the importance of his work at home. Captain Baker’s eldest sister is the commandant of the Red Cross Hospital at Houghton Regis, and another sister has recently left her nursing duties there to become probationer nurse at St. Bartholomew’s Hospital in London. Although he is over fifty, Canon Baker’s brother is serving in the Australian Forces and has been wounded twice at Gallipoli. Sadly Canon Baker’s hope that his brother and son would meet and the uncle would be obliged to salute the nephew never came to fruition.