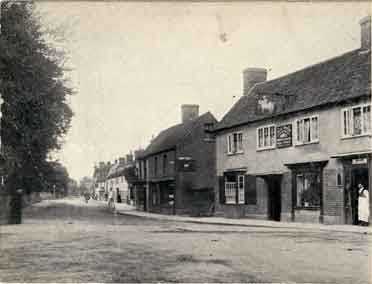 Monday 2nd August 1915: An accident which could easily have had tragic consquences occurred in Shortmead Street, Biggleswade this morning. The horses pulling a transport wagon belonging to the Signal Section Royal Engineers ran away from elsewhere in the town and bolted down Shortmead Street.  A cart belonging to Mr. Humphreys, a carrier from Northill, was standing outside Messrs. Woodall and Co.’s premises with Mr. Humphreys’ son inside. As the wagon passed the cart the horses and pole separated from it. The wagon caught the cart, totally wrecking it; the boy inside was extremely fortunate to escaping injury.

After hitting the cart the wagon ran on a few more yards, wheeled round and crashed into the bay window and glass door of Mr. W. Marsh’s house. Damage estimated at £6.10s was caused both to the window and door and to a quantity of antique china. Two little boys who were sitting on the doorstep had a miraculous escape. One suffered a slight injury to his foot and the other a grazed face. The horses ran on down the street until one fell near the Bridge, after which they were both secured. The wagon was only slightly damaged.

This was the second incident in the same area in three days. On Saturday an army van was being turned nearby at such a speed that the horses ran into the iron fence and hedge of Mrs. Pope’s house. The horses’ heads and legs together with the van pole were shot up into the air above the hedge and fence. It took about a dozen men to rescue the horses and get them and the van back into position. They went on their way apparently none the worse for the escapade.