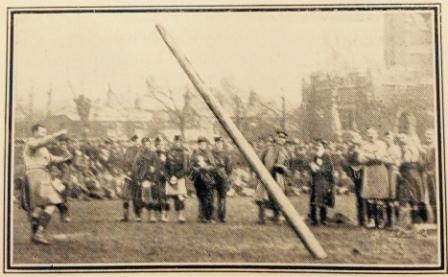 Tossing the caber, from Souvenir of the Highland Division at Bedford [X414/162]

Easter Monday, 5th April 1915: Another great Highland tradition has made its way to today, where a full programme of Highland Games has been in progress in the grounds of . Competitions have included piping, dancing of sword dances, Highland flings and reels, tossing the caber and the hammer, long and high jumping, bayonet fighting, tug-o-war and various running races.

The 8th Argylls proved the champions of the games, with their star performers including winning piper Pipe-Major W. Laurie, famous throughout as one of the best pipers in the world, dancer Sergeant Logan, who won the sword dance and the Highland fling, and an invincible heavyweight tug-o-war team. The programme was arranged by the Bedford Borough Recreation Committee for the Troops, who also provided stewards, time-keepers and other officials. Prizes were presented by His Grace the Duke of Bedford.