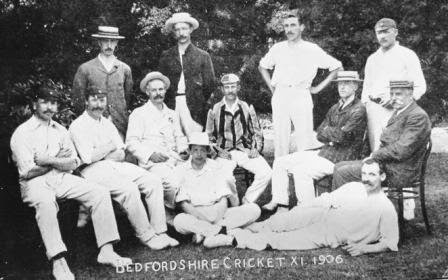 Sunday 11th April 1915: The decision was taken last night at a meeting of the Management Committee of the and District Cricket League held at the Lion Hotel, , to suspend competition for the coming season. The Secretary had contacted the Public Works Committee to discuss the preparation of pitches in the parks and received the following letter from the Town Clerk in reply:

“Dear Sir, Your letter was considered by the Public Works Committee this morning, and I was instructed to inform you that, under the existing circumstances, especially considering that the Bedford Park is leased to the Military Authorities, and that Russell Park is from time to time used by the Military Authorities for drill and other purposes, it is not the intention of the Committee to prepare pitches in either Park during the coming cricket season.”

Without pitches it will not be possible for the Bedford Cricket League to complete a full fixture list. To ensure that the League continues the Secretary was instructed to arrange matches with the Public Schools and with the Bedfordshire Club. It was also hoped that the use of the Kempston ground could be obtained so that a trial game of League players could be held to select a team for these matches.