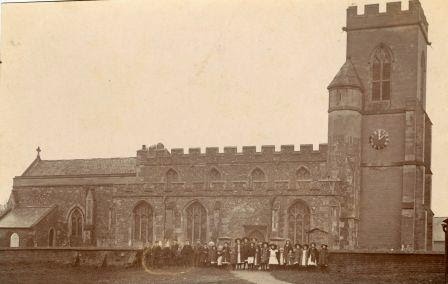 Wednesday 14th April 1915: This morning the Reverend J. Warwick Adams, former Vicar of Dunton, put on overalls instead of clerical dress and began work in a munitions factory at .[1] Since leaving Dunton he has been the Vicar of Wall, near (Staffs), but before becoming a clergyman in 1887 he was an engineer in his father’s engineering works. A couple of weeks ago, having taken to heart Sir John French’s statement that “the protraction of the war depends entirely upon the supply of men and munitions”, Reverend Adams offered his service to the War Office as a mechanical engineer. While the authorities were willing to accept him as an armourer sergeant, they could not grant his request to leave him free for Sunday duty in his parish. In view of this he took civilian employment at Messrs Kynoch’s factory.

Fifty-four year old Reverend Adams will begin work at 8am and work until 6pm with a one hour break for dinner. He will be employed using a “sliding rest lathe” and will work under the same conditions and at the same rate of pay as his workmates. He will lodge at during the week and return to Wall on Saturday evening to be ready to take Sunday services. His son, also an engineer by profession, is serving as a Second Lieutenant in the Royal Engineers.

[1] Reverend J. Adams was Vicar of Dunton from 1897. His successor did not take over until February 1916 so it is likely that he had only recently moved to the parish of Wall.
Posted by Kathryn at 07:00