Biggleswade Does Its Bit 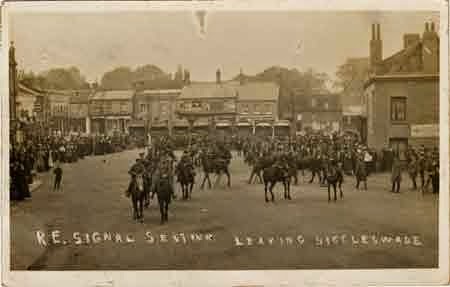 Thursday 29th April 1915: News has reached us of the contribution being made to the war effort in Biggleswade. Men from the town continue to join the Forces and the Roll of Honour for the town now includes a total of 338 men. Those who have joined the Forces this month include:


Inevitably there have been casualties from the town. Nineteen year old Private Alfred Lovett of the Bedfordshire Regiment is home on sick leave. He has been at the Front with the 2nd Battalion since the beginning of October and has been wounded three times, once in each arm and once in the shoulder. At Neuve Chapelle he was shot through the forearm with shrapnel and was sent to for treatment. Corporal Henry Gray of the 1st Battalion has written home to his brother, Mr. William Gray of Cromwell House, telling him he was wounded in the thigh by a shell splinter at Hill 60 and is now in hospital at . Private Charles Day and Private Sam Bilcock, also of the 1st , are both prisoners of war in and have written home asking their parents to send them some bread, butter and cake. Two of Private Day’s brothers are serving at the Front, and a third brother died while on army service in . In happier news Private Albert Millard of Luton and Miss Lottie Brown of Sun Street were married at on Saturday. The bride’s father, Mr. Tom Brown, is an old Militiaman and her brother Charles helped the 2nd to repel the Prussian Guard at in October and has been wounded twice. The bride wore a fawn tweed costume, and a white straw hat trimmed with white silk and orange blossom.

The stay of the Royal Engineers in the town has been commemorated by the gift of a solid silver communion chalice and paten to the . It is of Tudor Gothic design, inlaid with moonstones, and is inscribed: “Presented to the Parish Church, Biggleswade, by the officers and men of the Northen Signal Service Training Centre, Royal Engineers. Easter, 1915”. The town’s Belgian guests are also grateful for the support of the Biggleswade people. Monsieur Henri Bals has expressed his thanks on behalf of his family. Three of the children are attending the , where they appear to have settled in happily.