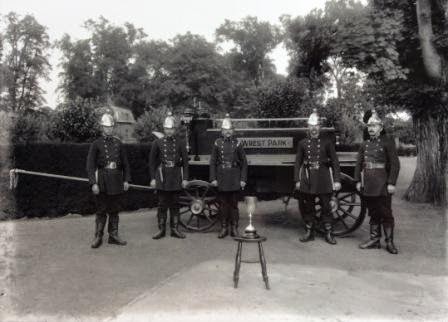 Barton
Today’s Harvest Festival is to be limited to just the Sunday Services. The Rector believes is “it is altogether unseemly to have social teas, football matches, meetings, decorations, and the like, when so many from our country – and even from our own village – are suffereing all the hardships of this cruel war so unhappily thrust upon us, and besides this, I don’t think any right minded sympathetic person would care to join in anything of that sort.”  Barton already has twenty five men serving in the army, with six of them at the front, and five more recruits have volunteered. This is more than half the number of eligible men in the village.

Gravenhurst
The Rector thanks those who responded to his invitation to send fruit, eggs and tobacco to the 66 sick and wounded at Wrest House. He considers it a privilege to help these men who have bravely fought to keep the Germans from turning  into a second . The war work party meet at the Rectory every Tuesday afternoon and have already sent six night shirts to the headquarters in . They are now working on bed jackets, night shirts, day shirts and socks. Miss Julia Smith, from , gave a lecture in the Village Hall on “What we are fighting for” and “what we are up against”. In her view the cause of the war was solely the Militarism of the leaders of the German Empire. Those unable to go to the front were urged to give some money towards the war effort weekly, and to “pray without ceasing”. Eight men from the village are now serving in the forces.

Clophill
The Harvest Thanksgiving in Clophill is also to be kept as plain as possible, with donations of fruit and vegetables to be given to the poor who need them this year more than ever. Thirty Clophill men are already serving their country, four in the navy and the rest in the army. The Scouts are helping the police to guard the Ampthill Tunnel and to keep open the Midland Main Line. The boys have been punctual and willing and have earned the cordial praises of the police and railway men. The Rector and Sidney Daniels have been enrolled as special constables and help to guard the tunnel by night. “The work is not always pleasant as no shelters are provided and one can get uncommonly wet in four hours. It is rather monotonous too, without even the excitement of a German spy.”

Westoning
Thirteen men from the village have left for the army, either as Reservists or Recruits.

Flitton and
Lantern views on the countries at war and war slides are being shown in the Parish Room at 7pm on alternate Wednesdays. A collection is made at the door with the aim of purchasing a few army blankets. The first meeting raised eleven shillings. The next meetings will look at  (7th October) and  (21st October).

Silsoe
The wounded soldiers quartered at Wrest are welcomed for a Church Parade each Sunday. A concrete tank holding 3,500 gallons has been installed at the village school to collect rain water. This can be pumped into a cistern in the boys’ lobby for use by the school (where washing facilities have until now been primitive) and can also be used by the Wrest Park Fire Brigade. Eight Regulars and six Territorials are serving their King and Country, and have been joined by four new recruits.