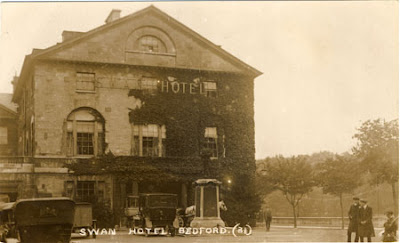 Sunday 15th September 1918: A procession of one hundred and twenty girls of the Women’s Army Auxiliary Corps marched through Bedford today behind the band of the Royal Engineers. When they arrived at the Soldiers’ Memorial, they were addressed from the balcony of the Swan Hotel. The aim of the meeting was to find an additional one hundred members from Bedford, as the town’s quota of the 30,000 required for Queen Mary’s Army Auxiliary Corps. The women are needed  as cooks, and will be offered free training at full pay of ten shillings per week. They will also receive uniform and full board. One of the speakers, Major Jayne, said that the preparation of food for men had always been one of women’s noblest duties, and it was their duty to obey the command. Although scandalous things have been said of the splendid women serving in this way, these were reported to be completely untrue – mothers were assured that they need have no fear in giving consent to their girls joining the Corps. The Mayor hoped that this would be the last recruiting call from Bedford, as he expects that in the near future peace will be proclaimed.