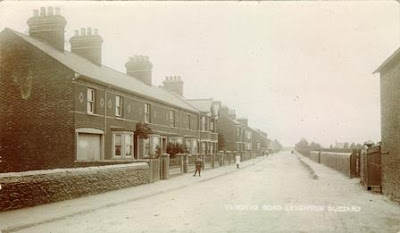 Saturday 21st September 1918: News has been received that two more Leighton Buzzard soldiers have been wounded and a Linslade soldier killed. Private William Hyde of the Canadian Machine Gun Battalion, whose home is in Vandyke Road, is now recovering from a wounded arm at the New Military Hospital in Gravesend. Lance-Corporal Lawrence Cook of the Bedfordshire Regiment, the son of Mr. John Cook of 13 Hartwell Grove, has been wounded for the third time and is now in a London hospital being treated from a gas shell wound in the face. Lance-Corporal Cook joined the Army less than two years ago; he received bullet wounds in the hand and thigh in August 1917, and in March he was shot in the leg. One of his brothers has been discharged from the Army due to wounds.

Private Peter Smith of 52 Old Road, Linslade, was killed in action on August 22nd fighting with the London Regiment in France. He was 18 years and 6 months old and had joined the Army in February. He had only been at the Front for twelve days when he was killed. Before joining up he was employed as an engine cleaner on the railway. Three of his brothers have also served in the Army: one was reported missing in April, another is now in Egypt, and the third is in France.[1]

[1] His older brother William Smith was killed in action on 13th April 1918 while serving with the Royal  Warwickshire Regiment.