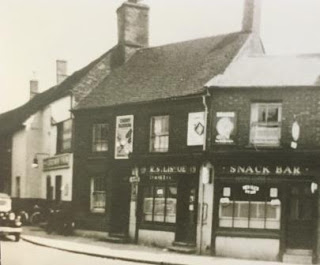 Tuesday 29th August 1916: The 71 year old landlady of the Crown Inn at Leighton Buzzard, Mrs Margaret Gotzheim, has appeared at the Leighton Police Court following a raid on the Crown and an adjacent cottage, as a result of which she was charged with selling intoxicating liquors during prohibited hours, and for selling beer to a child which was not in a sealed container. Her case was heard together with those of two men and a women who were charged with being on licensed premises during prohibited hours and with sending a child for beer. Two of these co-defendants were Henry James Dover and his wife Amelia, a daughter of Mrs. Gotzheim, who lived next door to the Crown at 2 Bedford Street.

Police Superintendent Matthews wished to read the statement from Mrs. Nellie Mell of 78 North Street to the court, but the defending solicitor objected as she was present to give her own evidence. Superintendent Matthews complained that she was now a hostile witness making statements the opposite of those she made to his police sergeant. Mrs Mell admitted signing a statement but said she was not responsible for what she said as she was so upset; she was looking after two invalids and had not been to bed for thirteen weeks. The sergeant had come into the yard on Sunday morning as she was “doing her vegetables” without invitation. He asked what had been brought to her from Mrs Dover’s house and she said milk; she also said some beer had been brought, but did not say when. The beer had actually been brought round on Saturday evening but as she was upstairs with her invalids she did not find it and drink it until just before the police came. She agreed that by then the beer was rather flat!

Evidence was given by the police to the effect that jugs full of beer were being taken from the back door of the Crown into the Dovers’ house next door, where they were being drunk or passed on to others. The situation was complicated by the reluctance of family members to give evidence which might support the police case. One of Mrs. Gotzheim’s forty grandchildren, Henry Charles Samuel, admitted seeing his aunt, Mrs Dover, drink a half pint, but said he had never seen any beer sold before opening hours on a Sunday. Another co-defendant, Mr. George Short, was found in the Crown Inn, but said he was delivering papers, as he had done regularly for several years; he denied having been served with anything although there were drops of beer hanging on his moustache. No beer was found by the police in the Dovers’ house.

Mrs. Gotzheim’s solicitor pointed out that his client had a clear record except for one occasion the previous year when she appeared in court on a charge of travelling to Luton without permission while registered as an alien; this would not have happened except for the war and she had held a licence for 35 years without any problems. He argued that the police evidence was based on suspicion, and all the coming and going was natural enough when those involved were relatives. The whole case hinged on a jug found at Mrs. Mell’s and the half pint drunk by Mrs. Dover. Mrs. Gotzheim explained that her daughter normally cooked a Sunday joint for her as she had a gas stove whereas the Crown did not, and she usually gave her a glass of beer for her trouble. The magistrates concluded that there was insufficient evidence and dismissed the case.