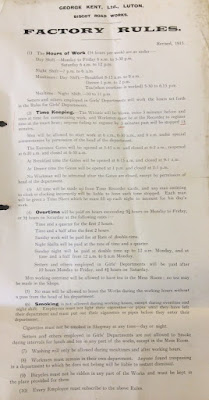 Sunday 7th August 1916: Seventeen year old Joseph Parrott of Leighton Buzzard has appeared before the magistrates at Luton charged with contravening the Explosives Act. The young man was employed at Messrs. George Kent Ltd. On July 19th a press worker noticed a “peculiar” smell in a corridor and mentioned it to the defendant, who worked as his boy, saying: “It’s a funny thing I have heard about you, Joe. I hear you bring matches in this place. If I knew you brought matches here you would go outside quick, because this isn’t the place for matches.” Parrott at first denied having any, but later admitted having some in a tin. He produced the tin, which contained 23 matches.

The works manager produced a notice which he said had been posted at the entrance gate and elsewhere in the works, warning that matches or any other item likely to cause an explosion must be left with the gatekeeper and not taken into the works. He also produced a copy of the printed rules, showing that the penalty for infringement of this regulation was up to 40 shillings. The contents of nearly every room were dangerous, and if one of the matches had been dropped and trodden on it would probably have destroyed the entire works and cost a considerable number of lives. It had been known for a long time that the rule was being broken, but it was hard to detect. He had been instructed that he must prosecute the first time that an infringement was detected. He did not wish to be hard on the boy, but was certain the lad was well aware of the rules.

Joseph Parrott pleaded guilty to the charge. He said he had been at the works for just over six months and gave all his weekly earnings of 25 shillings to his mother as there were five children in the family. The Magistrate’s Clerk commented that he was to young to smoke, and the Mayor said he did not believe that all the lad’s earnings went home. He was fined 20 shillings with a week for payment, with an alternative of fourteen days’ imprisonment.